THE BEST OF GLAMOUR STRAIGHT FROM CANNES 2019

This week started with an amazing slew of fashion dosage with the onset of Cannes Film Festival and we are overflowed with the glamour that graced the red carpet throughout the week – and guess what? We’re are only half way of the Cannes journey, there’s a lot more to drool on. With a grand star-studded opening at the premiere of Jim Jarmusch’s The Dead Don’t Die until now – Selena Gomez to Sara Sampaio to Deepika Padukone – one after another stellar appearances are making history in the alleys of French Rivière. While some are swooning over Elle Fanning’s dazzling peach caped gown and Priyanka Chopra’s glitter-to-the-hilt gown, others are gaga over Deepika Padukone’s Lime Green extravagance and Alessandra Ambrosio’s flaming red gown; here we are bringing you our personal favourites so you don’t miss any fashion moment that’s worth the glance from this ritziest film festival of the year. Let the show begin.

Selena Gomez
As one of the first faces to hit the Red Carpet for the first time ever, Selena’s look reinforced the ‘less is more’ with her pearl white two-set quilted ensemble by Louis Vuitton, paired with Chopard jewels, and made it look even more sophisticated with her lady-like grace. 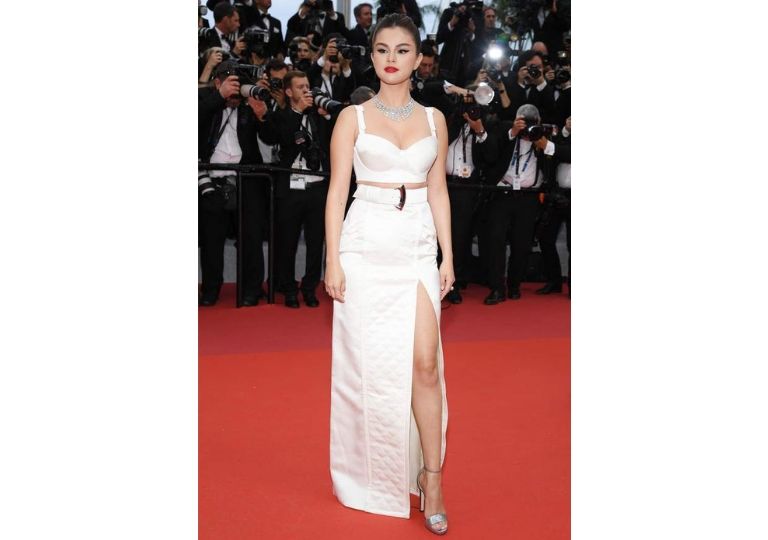 Romee Strijd
Romme Strijd made an angelic red carpet appearance in a custom-made lace gown from Etro – the neckline drop, intricate Paisley motifs, nude-dusky makeup, and her beautiful smile undoubtedly throbbed a lot of hearts at Cannes this year. 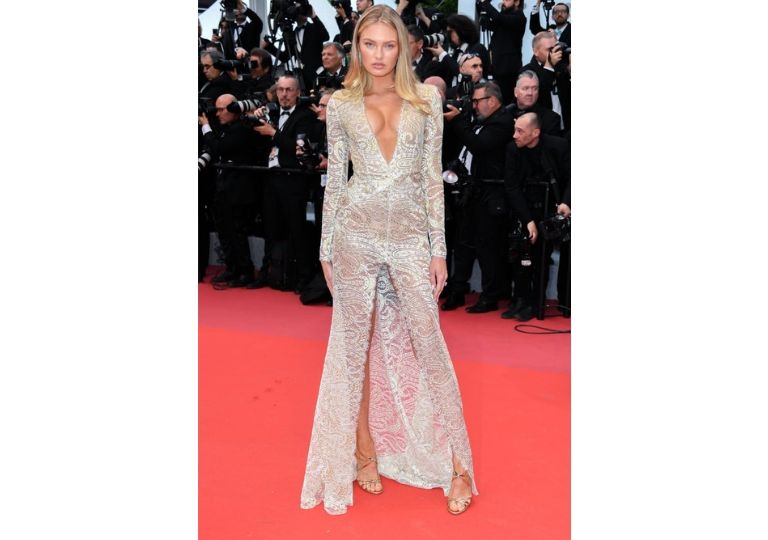 Alessandra Ambrosio
The Victoria’s Secret model absolutely looked drop-dead gorgeous in a stunning flaming red ensemble by Julien x Gabriela attached with a big red cape, drape detailing and thigh-high slits. But what took our eye, were the striking shots she gave with her chiffon cape flowing in the air – it was so magnificent that for a moment we could imagine ourselves in one of the Victoria Secret shows. 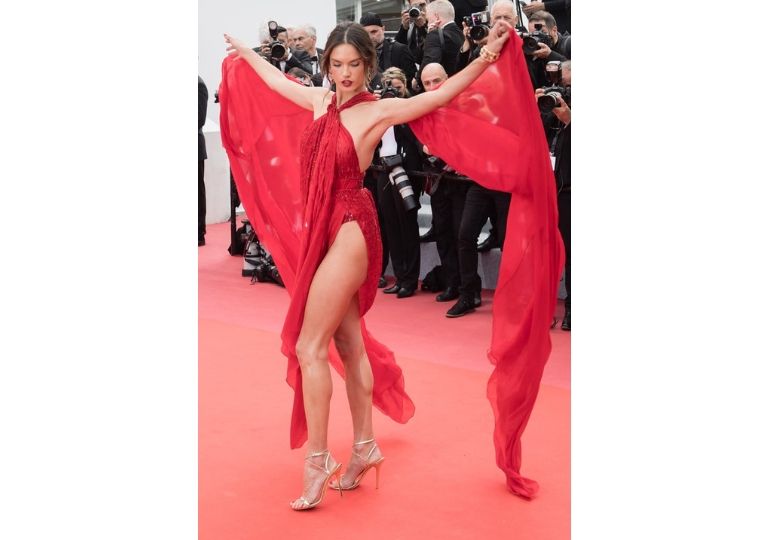 Izabel Goulart
Izabel Goulart looked like a sparkling version of Times Square Ball in her glistening Zuhair Murad SS19 couture number while walking the trail at the premiere of Rocket Man. Those laid-back curls added just the right amount of effortless beauty to her outfit. 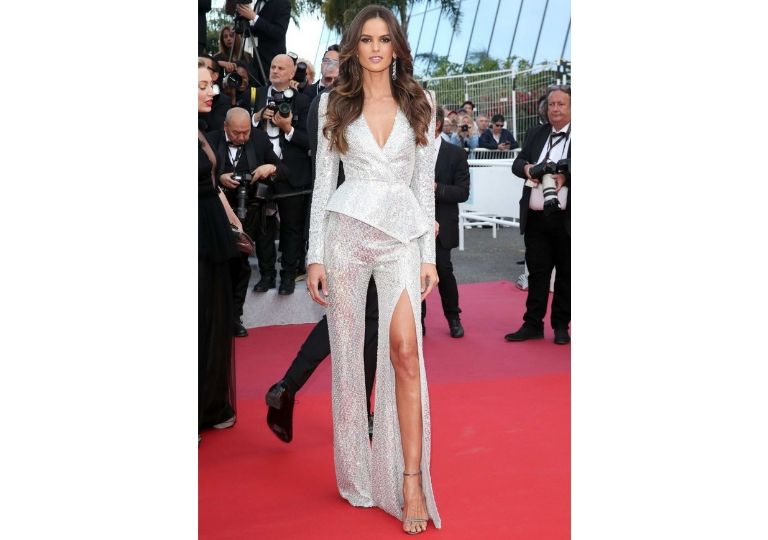 Kangana Ranaut
The rebel lady of Bollywood looked ethereal in a delicate pink heavily-embroidered Michael Cinco Couture gown that indeed made her Red Carpet walk look like a modern-day fairy-tale. As reported by a few sources, the actress lost 5 Kgs in 10 days to look her best self at the event, and we are quite in agreement that it worked and how! 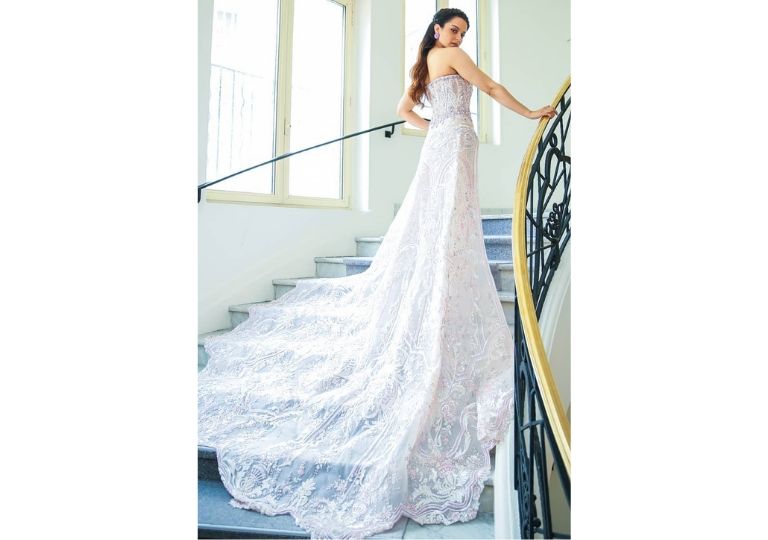 Shailene Woodley
The American model, actress, and activist chose a very unique yet flattering outfit to walk the Cannes trail – a Christian Dior Haute Couture chic tuxedo dress made by Maria Grazia Churi, especially for the event. Its black cashmere coat with ivory satin lapels and tulle tie definitely took all the limelight though! 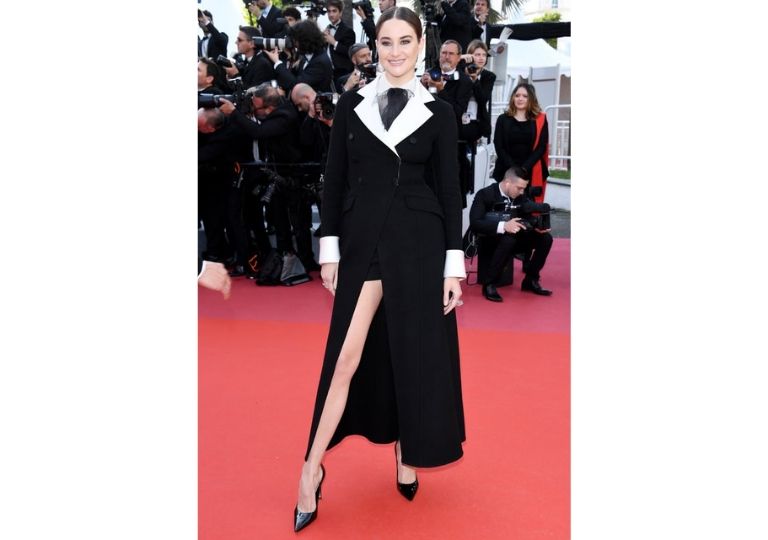 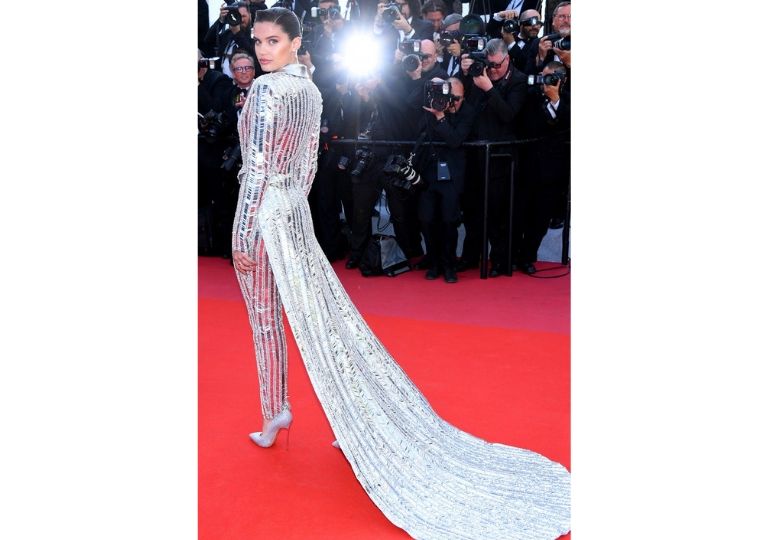 Deepika Padukone
Deepika’s presence at the Red Carpet was no less than a present (literally!). The B-town queen wore a Giambattista Valli Haute Couture lime-green tulle gown to the screening of Pain and Glory. Although Giambattista has all the rage for tulle gowns but this look was par excellence owing to the lady’s ever impactful charm – the soft pink detailing at the waist, the knotted headgear, and the cute bow-tie on its green buoyant canvas looked insanely beautiful. 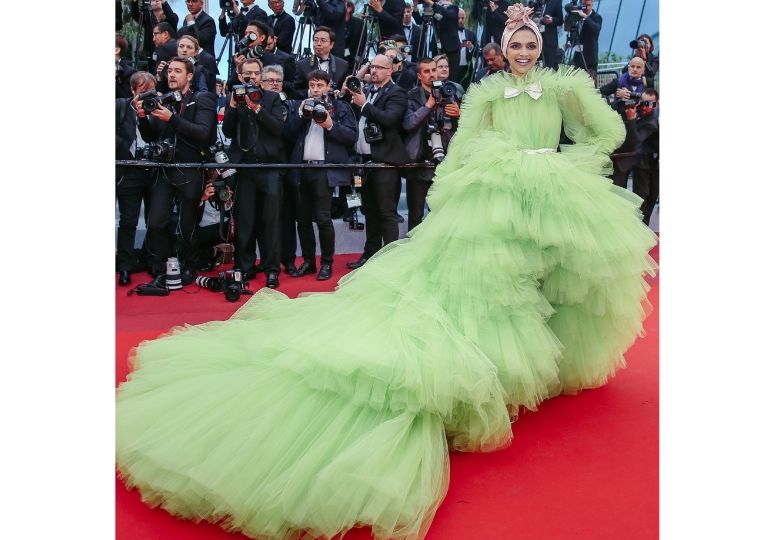 Praya Lundberg
The actress stunned us all in the red Versace ensemble with the right amount of gold in the ensemble’s giant safety pin details (which has been quite a buzz since Versace models walked the ramp in dresses with this metal embellishment) and strappy wedges. 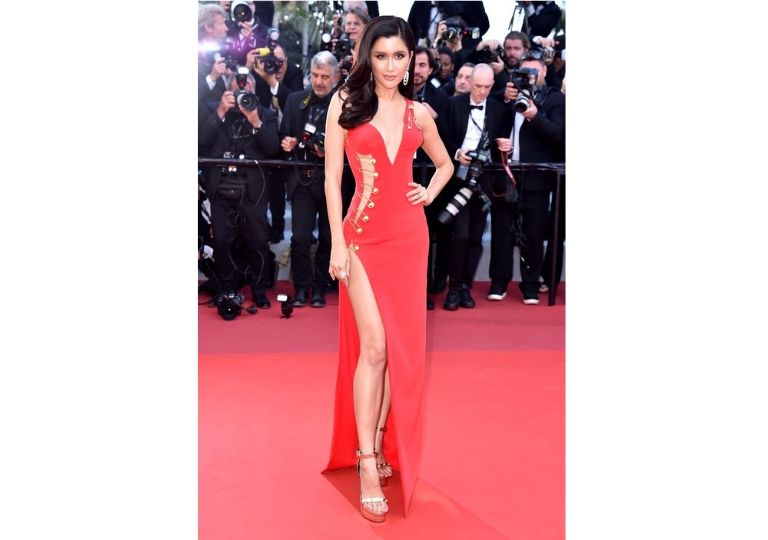 Blanca Padilla
The Spanish model is proving all over again that red lips and messy bun is always a good idea, especially when you are teaming the look with a stunning Givenchy ensemble and Bulgari Jewelry. 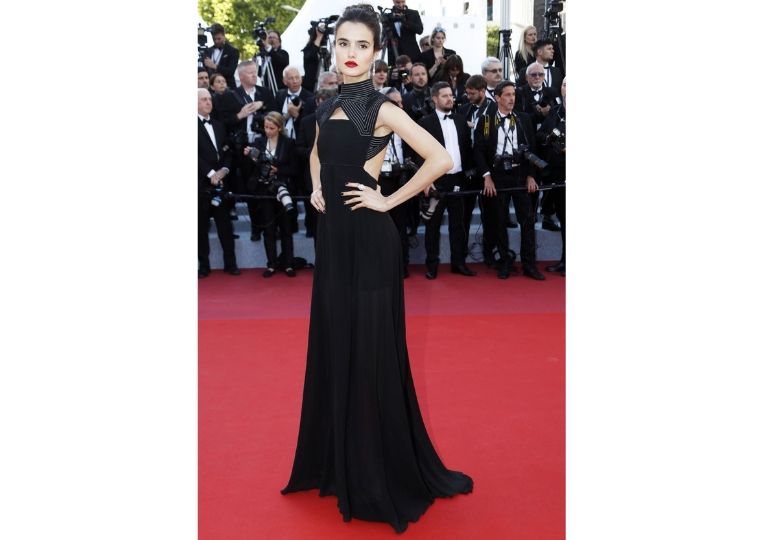 Priyanka Chopra
PC finally made her debut at the Cannes Film Festival that we’ve all been waiting for, she chose to grace a custom creation by Roberto Cavalli – an evening black silk duchesse gown embellished with paillettes and sequins, thigh-high slit, statement earrings, and loose curls. The look complemented her dusky sensuousness so well that you can’t take your eyes off her. 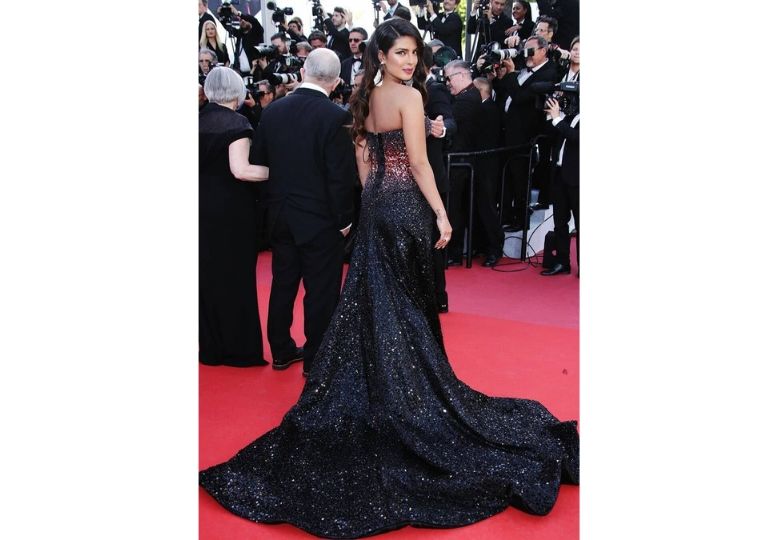 Sririta Jensen
This undoubtedly has to be a show-stopper look so far, the lady attended the screening of Rocket Man wearing a gown by Michael Cinco that looked no less than an extraordinary amalgamation of layers and ombre hues. 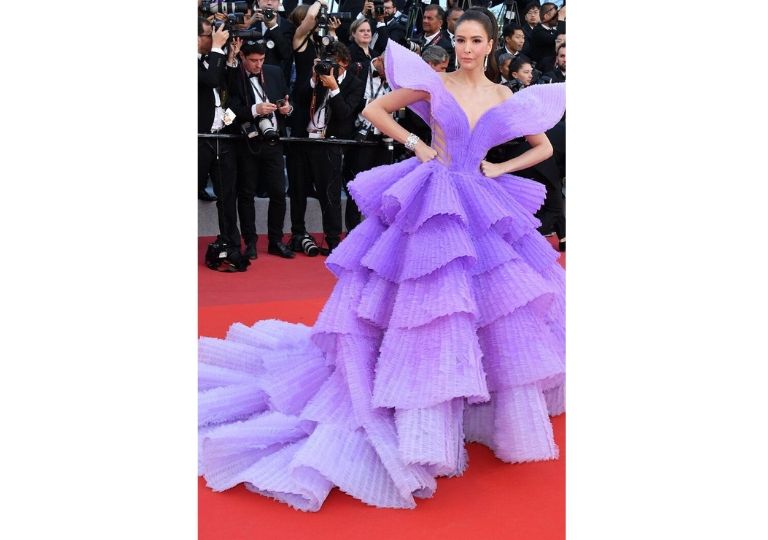 From so many awe-inspiring looks, deciding a few is quite a difficult one. Which one did you like the most?

From Penelope Cruz's ultra Hollywood glam to Camilla Morrone monotone makeup, we have compiled the best from Oscars 2020

A RECAP OF The Best Bollywood Fashion Trends Of 2019

SIX CELEB-APPROVED FALL LIPCOLOURS THAT ARE NOT ALL BROWNS!

From deep burgundy to flattering nudes, here are the lip colours you need in your vanity drawer right now

From asymmetrical hems to flowy chiffons to the wonderful tulle

THE FASHION JOURNEY OF BOLLYWOOD BEAUTIES AT CANNES 2019

From sarees to gown to pantsuits, the B-town’s Cannes looks are the talk of the town