Vogue’s Forces of Fashion‍‍‍ conference returned to New York on October 11. The second edition delivered plenty of compelling, disruptive figures who helped us question our current times in the aptly themed ‘Forces for Change’. With the world reeling from the aftermath and continued effects of the #MeToo movement, global warming and the movement towards more equitable societies, the moment seemed ripe for the opportunity and Vogue embraced it with gusto!

The conference included 10 panels: celebrating the players who dare to work differently, encouraging dialogue between insiders and radicals, discussing the challenges upending the modeling industry, and bringing together activism and business. We bring you highlights from the models, designers, activists, artists and more:

Rocha & Rodarte
United in their fantastical vision, Simone Rocha and sisters Laura and Kate Mulleavy of Rodarte helm fiercely independent brands. Overtly feminine with an almost invisible structural strength, the brands are known for their love of pearls, frills, ruffles and lace. The conference saw them touch upon a number of topics including their work as independent women designers, ways in which art and fashion can come together and the influence of the current political climate on their design sensibilities. To know more about their fascinating journey and future plans, read the full transcript of their conversation on Vogue. 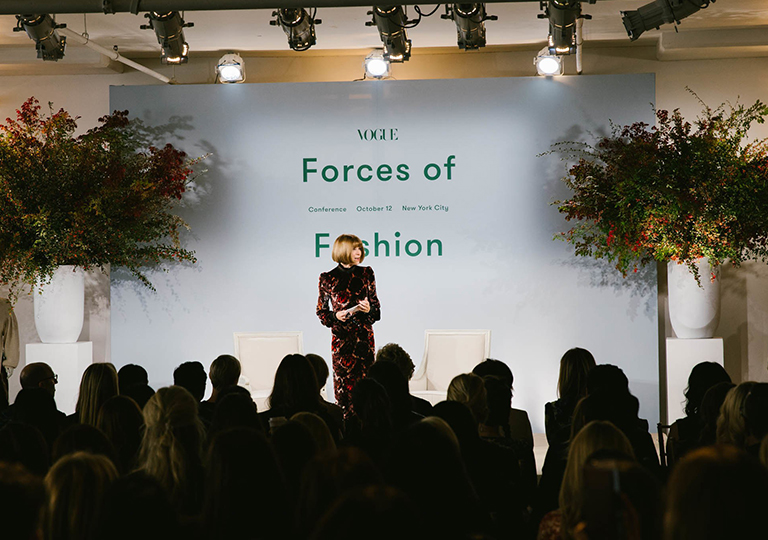 Andrew Bolton & Ryan Murphy
With ‘camp’ the official theme for The Metropolitan Museum of Art Costume Institute’s spring 2019 show, the stage was set for Andrew Bolton, curator of the Met’s Costume Institute and Ryan Murphy, creator of hits like Glee and Feud, to discuss acceptance, the LGBTQ community and fashion. So, what is ‘camp’? According to Bolton, “It’s heroism for people who weren’t intended to be heroes.” Their witty repartee from this enjoyable session served up plenty of food for thought.

Zendaya, Ashley Graham, Kendall Jenner & Gigi Hadid
The new age models talk about ‘real models’ versus ‘role models’, the importance of representation and the responsibilities that come with their kind of visibility in this illuminating, engaging and funny discussion:

Neil Blumenthal, David Gilboa & Iman
The founders of Warby Parker, Neil Blumenthal and David Gilboa, unveiled the Pupils Project early last week. The eyewear brand’s latest initiative seeks to provide free eye exams and glasses to underprivileged children.Tying up with celebrities including Lena Dunham, Rosario Dawson, Gloria Steinem, Chloë Sevigny and Iman who will design and model sun and eyeglasses, it brings together activism and business seamlessly. Perfectly poised to discuss these topics, the founders were joined by Iman in a panel titled “Don’t Just Sell: Do Something”.

Kris Jenner
The event closed on October 13 with the irrepressible Kris Jenner, matriarch of the Kardashian family and manager of several brands and stores. With her trademark humour, “menopause is a bitch”, Jenner took the audience through her gruelling day-to-day schedule, made them privy to her savvy business acumen and dropped hints about future plans in her rollicking conversation that was the perfect way to end the conference!

From Emma Stone dashing Louis Vuitton campaign to Gucci’s surreal aesthetics, here are the five best Spring/Summer fashion ad campaigns that we are obsessed with (and you will too!)

From bucket bags to block heel boots, the collab is here to redefine the closet

Shop these products to recreate the maven's look

From dolled-up feathers to chandelier dress, here are the best-dressed attendees

A DESIGN LOVER'S DREAM FOR TRAVEL

Galleries and bookshops off the beaten track in London, New York and Paris

26 pieces from the original Collection back in stores

THE SUIT - POWER DRESSING IN THE AGE OF #ME TOO

Our Fall perfume edit to complete your ensemble

Our roundup of the best of SS19