Half the joy of dressing lies in imagination – identifying trends, attaching a particular vibe or emotion to the season’s overall ‘look’ and adding your own timeless elements to what the designers bring out four times each year. To enable you to do the same well in advance of the approaching season, here is a glimpse of upcoming styles in shoes: a most defining element of any wardrobe. Take a look and decide how you will make them uniquely yours. 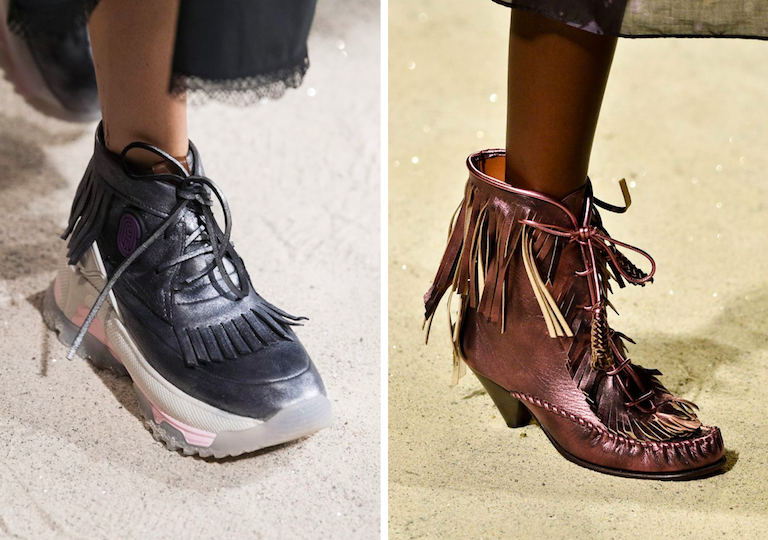 A cowboy favourite, some fringe is all you need to propel an outfit from spartan to edgy. While we’ve already been seeing a great deal of it on bags, fringy shoes are returning after quite a while. Coach 1941 has an interesting set of these statement shoes. 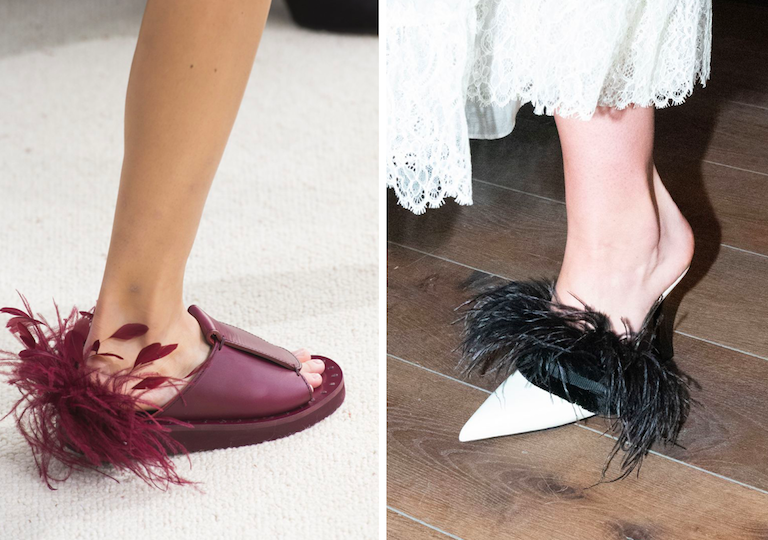 Who dislikes a wee bit of flair every now and then? Want to swap your plain pumps with something animatedly glamorous for a merry evening out – take to these monochromatic shoes from the Brock Collection. Also, Valentino has a nice long range of feather detailed footwear – we say, pair them with breezy midi dresses for a light, romantic mood. 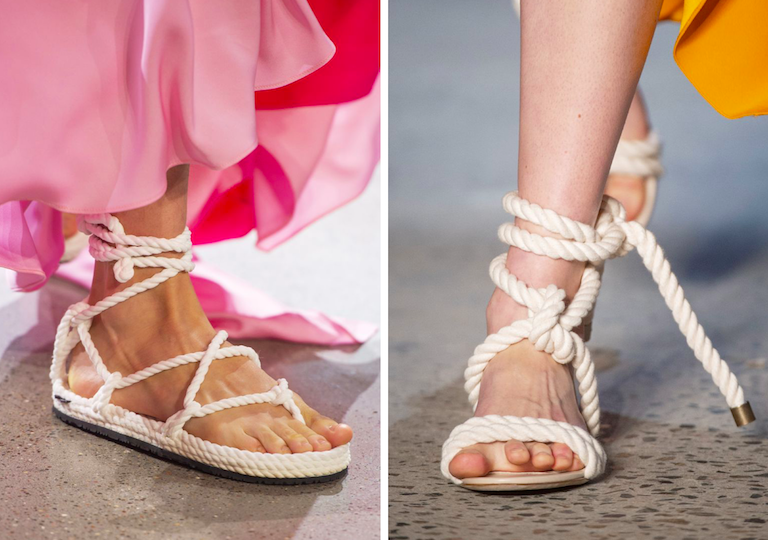 Marine elements in high fashion are a continual occurrence; but what usually happens with sailor stripes and anchor motifs is now being accomplished through ropes – and not fancy, dyed ropes at that – rather raw ropes in their natural off-white hue. Something in this rope-ridden trend rings the word ‘beach’ in our minds over and over again – wear these tie-up sandals with your airy cover-ups, strappy maxi dresses or denim shorts for an uber-cool appeal. 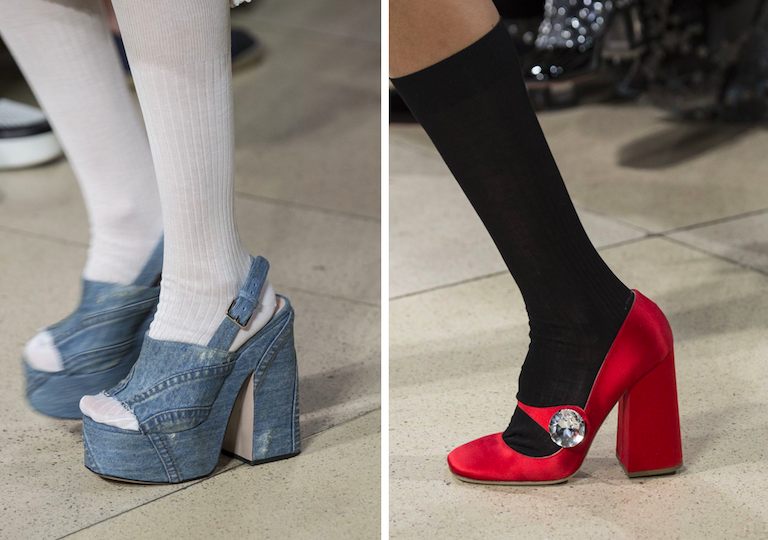 If we go by their pronounced presence on runways, tall block heels are the new stiletto. They are more functional and edgy than a pencil heel but be careful of what you pair them with – they’re best worn with clothing that balances out the chunkiness – for instance, a fuller dress or skirt instead of a slim fit one. 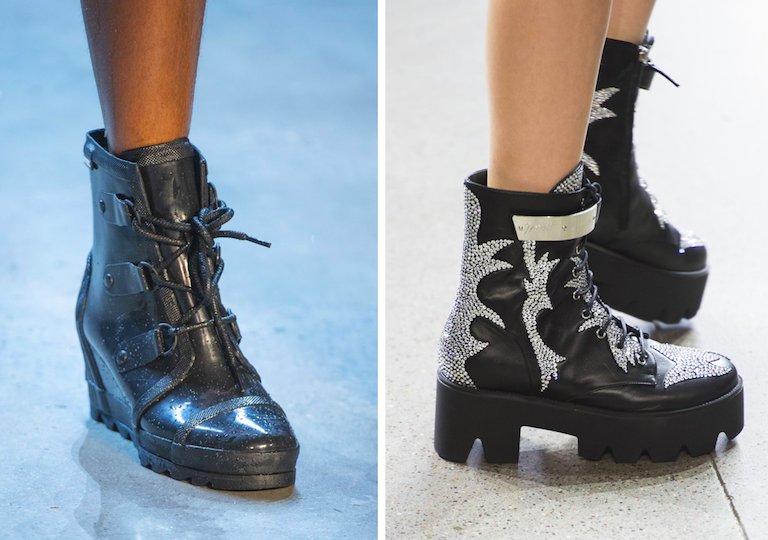 We were barely done lauding the grungy boots from Marc Jacob’s comeback collection when there came a gust of fresh spring air and brought in another set of combat boots – we say, we’d love them just as much with summer dresses as we did with jean-plaid-suede this fall. 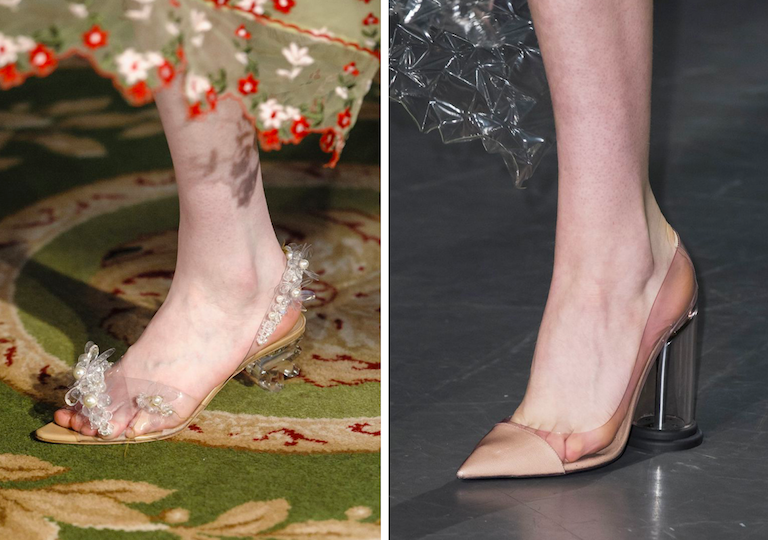 Last seen in Spring/Summer 2010, clear heels are back yet again. And however platitudinous the association of Cinderella with shoes may be, it’s inevitable when glassy clear heels are being spoken of. Treat yourself to a pretty slipper reminiscent of this fairy tale like the one by Simone Rocha on the left; or make a bold statement with a block heeled pump that only the rarest of the rare can pull off with panache.

With all these and so many more new pairs of shoes to accommodate in your dresser, brace up for a literal spring cleaning of the shoe rack – you will need some extra space!

The collection was a perfect blend of colours and opulence

THE H&M AND GIAMBATTISTA VALLI COLLAB: FOUR LOOKS THAT STOLE OUR HEARTS

From tulle ruffles to crystals to fur, Giambattista extends his style off the runway

A collection that brought theatrics to Paris Fashion Week

Dress fashionably this fall with the trendiest wardrobe

All things you need to know about this natural beauty trend

SPRING FASHION TIPS FOR THE MOST INSTGRAMMABLE PICTURES

From tie-dye to dramatic feathers, here’s your latest photogenic attire

OPEN YOUR CLOSET TO COSTUME JEWELRY

All the reasons and ways to wear those unconventional pieces

The hottest accessories that emerged from SS19

SS19's ultra-feminine beauty trend is all the rage

These models of Indian origin are taking on the world

Block Heels Are Back & Here Are Our Top Picks